Terrazza. Artist histories places in Italy in the 2000s 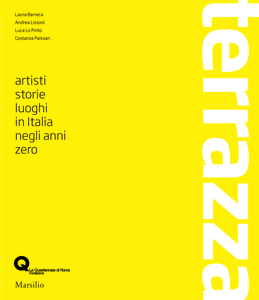 The first atlas of young art in Italy after the year 2000: the most dynamic cultural realities and emerging artists. A wealth of information and immages, with accompanying texts by four new-generation curators. An investigation into where Italian art is going. 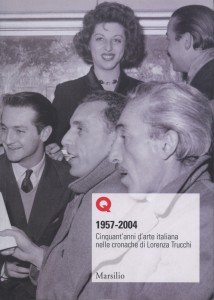 A selection of seventy-two articles from more than one thousand five hundred pieces written by Lorenza Trucchi for newspapers, weekly publications, magazines and exhibition catalogues between 1949 and 2007, in which the wonderful quality of Trucchi’s prose guides the reader through the history of 20th-century Italian art. The result is not just a record of works of art and the lives of the artists themselves, but also and above all a tale of strategies, concepts and exhibition practices. 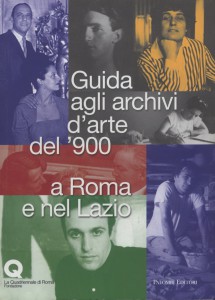 A first, fundamental survey of 20th-century archives on artists, historians and critics, galleries, foundations, artistic and cultural associations, held by private individuals and public institutions in Rome and Lazio. 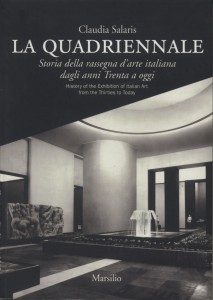 From the first Quadriennale in 1931, Claudia Salaris reconstructs the key moments in 20th-century art through the history of the Quadriennale, describing the fourteen exhibitions that have featured the biggest names in the history of Italian art. The author provides an account of the artists involved by making use of the wealth of iconographic material and the series of press reviews held in the Quadriennale’s historic archive, revealing the inclinations and tastes of the critics, the choices made by collectors, artistic production and Italian cultural policy of the 20th century. 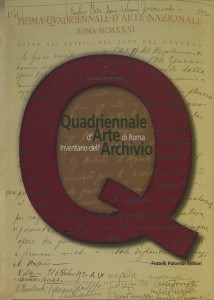 The first inventory of the Quadriennale’s historic archive, drawn up after reorganizing the complex collection of documents, edited by Bruna Colarossi with Assunta Porciani and Marco Pizzo. The final section of the volume provides the details of the various Quadriennali, the other exhibitions organized by the institution, the winning artists, and a general list of the artists who participated in the Quadriennali. 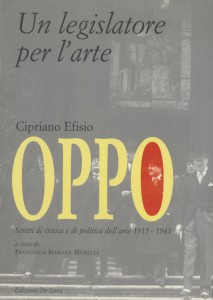 Cipriano Efisio Oppo was one of the most influential men in the field of art during the Fascist years, described as a “great arbitrator of Italy’s artists” by Margherita Sarfatti in 1930. Not only was he the deus ex machina and man behind four Quadriennali, but, as the secretary of Italy’s national trade union of artists and a parliamentary deputy, he implemented constant reforms in the Italian art system. Featuring more than one-hundred and fifty pieces of writing by Oppo, this book helps provide an insight into his personality and a real understanding of the steps he took to protect contemporary art.