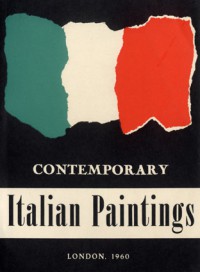 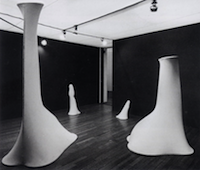 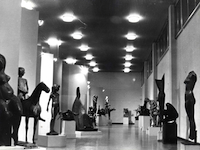 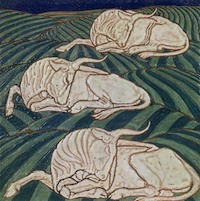 The institution also promotes Italy’s artistic culture through other exhibition initiatives. This type of activity began in the 1950s and has continued up to today. Overall it has held around one hundred exhibitions, both in Italy and abroad, often in partnership with other institutions.

The exhibitions held to date have been very diverse and varied. Some have been devoted to an examination of contemporary Italian art through expressive techniques (painting, sculpture, drawing). A significant core group has consisted of historic exhibitions intended to study the actions of individual figures who played a key role in the development of 20th-century Italian art.

The exhibitions held abroad, which have mostly been touring exhibitions, are the result of a partnership with the Farnesina, which has led to the organization of over sixty exhibitions in Europe, the United, States, Japan, Australia, Central and South America, in some African states and in the Arab countries. A significant aspect of the partnership with the Ministry of Foreign Affairs is the Italian participation in international biennials. Since the beginning of the 1950s, the Ministry has entrusted the Quadriennale with selecting the Italian artists to take part in various biennials around the world, including the second International Modern Art Exhibition in Tokyo (1953), six editions of the Biennial of Young Artists in Paris in the 1950s and 1960s, and three editions of the São Paulo Biennial (1975–1979).The earliest exhibitions included, in 1952, the touring exhibition of award-winning artists from the 6th Quadriennale, which started out at the Galerie des Beaux Arts in Bordeaux and visited a further ten exhibition sites, the ‘Mostra d’Arte Italiana Contemporanea’ (Kamakura, Museum of Modern Art, 1955) and ‘Arte Italiana dal 1910 ad Oggi’ (Munich, Haus der Kunst, 1957). Other exhibitions, over following years, included ‘Contemporary Italian Art’, a touring exhibition held in Australia in 1963 to coincide with the Melbourne International Exhibition, ‘New Italian Art 1953/1971’ (Liverpool, Walker Art Gallery, 1971) and ‘Italy Two. Art Around ‘70’ (Philadelphia, Civic Center, 1973).

Some of the most important historic exhibitions have included those devoted to Divisionism and Italian Art Nouveau (both at the Palazzo della Permanente in Milan, in 1970 and 1972 respectively), the touring didactic exhibitions on Futurism (1976–1978) and on Metaphysics (1982) and the more recent ‘Roma Anni ’60. Al di là della pittura’ (Rome, Palazzo delle Esposizioni, 1990). Among the retrospectives, we should recall the ones devoted to Lorenzo Viani (Paris, Galerie du Centre d’Art Italien, 1952), Gino Severini (Rome, Palazzo Venezia, 1961), and Duilio Cambellotti (Rome, Galleria Comunale d’arte moderna e contemporanea, 1999).

In more recent times, during the two-year period from 2010–2011, the institution promoted ‘Artista CHIAMA Artista’ at Villa Carpegna, an exhibition cycle devoted to young artists. The initiative saw the involvement of established artists in the role of tutors, with the task of inviting artists aged between 20 and 30 years old to create a site-specific work in the Sala delle Colonne at Villa Carpegna.

An analytical description of each exhibition is available on the web pages of our Library Archive. The search function provides access to information on the curators, participating artists and the catalogue. A simple click also provides information on which other Quadriennale exhibitions the artist has participated in and how the artist is documented within the institutional archives.

There was an error sending your message. Please try again later.